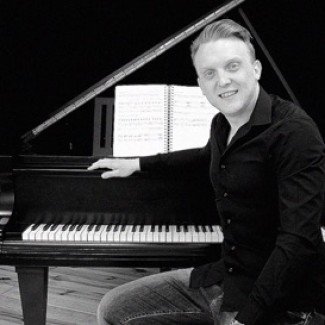 Chris graduated from Strathclyde University with a BA Applied Music (Hons) degree and went on to complete his PGCE (Secondary Music). As a freelance Musical Director/keyboardist/trombonist and arranger Chris has worked with some of the UK’s leading theatre companies and artists. Notably, Chris plays trombone/keyboards with the Red Hot Chilli Pipers (REL Records) and has written for and played on the band’s four most recent albums. He regularly tours with the band in USA and Europe. Chris is also passionate about education and works as Senior Musical Theatre Masterclass Coordinator at UK Theatre School, Glasgow. He has also taken up vocal coaching roles at The Dance School of Scotland and New College Lanarkshire.

Chris has also been the Musical Director for many other companies throughout Scotland. Shows include: Beauty and the Beast, Jesus Christ Superstar, All Shook Up, High School Musical and We Will Rock You